Skip to content
Interview with the director Mingzhu Ye

Mingzhu Ye is a young talented producer, director and singer originally from China. After two years of research, she produced, directed and edited her debut short film “If We Have Next Life”, Finalist at the Oniros Film Awards in January. In this interview we talk about love, about being a female director and about celebrating our cultures. As Bong Joon Ho reminded us during the Academy Awards Ceremony while quoting Martin Scorsese: “The most personal, is the most creative”, and what’s more personal than our own family stories and traditions?

Hi Mingzhu, it’s been a pleasure watching your work and congratulation on being a Finalist at the Oniros Film Awards!

1. When did you decide to become a film director?

I’ve always enjoyed watching movies since I was a little kid and I often found myself getting emotional with the characters on screen. Sometimes when I see something I don’t like in the movies, I would imagine what I would have done as a director. I imagine that I could have told the story in a different way, bring out a stronger emotion in the actors or even try out new and original ideas.

In 2016, I had the opportunity to study in the United States. While I was there, I had the privilege to meet people who have taught me more about the European and American film industry. I was exposed to more variety of movies which fuelled my passion to be a part of this industry and I was determined to make my own movie.

2. Where does the inspiration of “If we have next life” comes from?

I come from China and in Chinese culture, we believed that humans reincarnate and that we all have a previous life. I shared this belief and became fascinated with the idea of making up for the regrets we have in our previous life. We make many mistakes in life that we all want to change and how wonderful it would be to have the opportunity to do so. That was the inspiration behind this film.

3. “Looking into the eyes of another person 500 times in your previews life, allows to meet them in the next one”: Why 500 times? What’s the story behind such a specific number?

The origins of the number came from a popular folklore in China, I made a couple of changes before adding it in. The complete and unedited statement roughly translated to “If looking into your eyes 500 times in my previous life allowed me to meet you once in this life, I hoped that a 1000 times in this life would make you mine.” 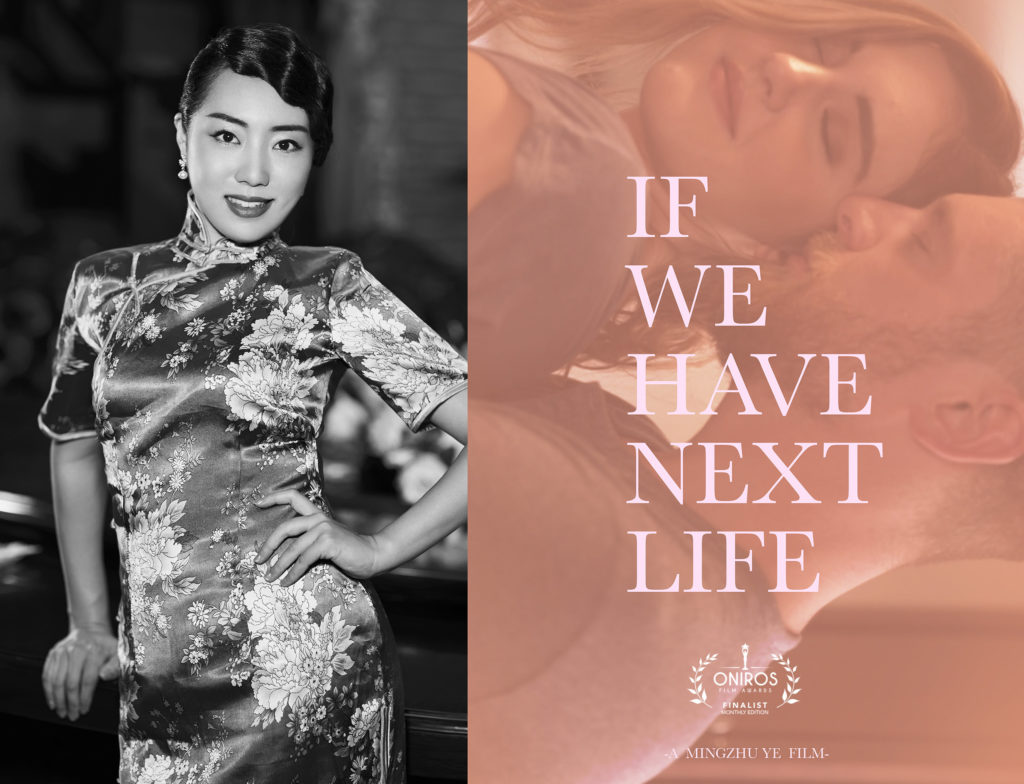 4. What is the role of music in your films? Do you feel it’s like one of the characters of your story or do you use it more to create tension, drama and circumstances?

I think that the music in a movie is very important. A good movie must be able to invoke a feeling in the audience both visually and aurally. Music can enhance the atmosphere of the plot. It is an essential tool for every filmmaker to convey this story.

Starting from writing the script, I spent a lot of time making sure that every detail was up to my standards. It felt like I was watching my own child grow up in front of my own eyes. And as we progressed into directing the film, personally I felt like it was the most challenging aspect of the entire process because the story was inspired by the Chinese culture. I was worried that the actors would not understand it therefore I needed to use different methods to get the emotions that was needed for the film. Editing the movie was an interesting process, from it I have learned and used some visual effects that I have never encountered before. I found it fascinating and I enjoyed the whole process.

6. What are the directors that inspire you the most?

For me, my favorite director is James Cameron. He is a director that knows how to convey a story very well in his films. Titanic will always be my favorite movie of all time.

7. In light of the recent Oscars nominations, and the exclusion of talented female directors as Greta Gerwig, Lulu Wang, and many more, what are your thoughts as a female director yourself? How do you think the film industry can improve moving forward?

I think that us female directors are more in touch with our emotions, the stories we choose to tell are more focused on life and we are not afraid to talk about the more sensitive and vulnerable feelings that others might shy away from. Nowadays, more and more female directors are finding success in the film industry which is something worth celebrating. It just shows that the industry is become more inclusive, allowing more opportunities for female voices to be heard by the general masses and letting the audience experience the story from a female’s perspective.

8. How did you choose your actors? Did you have a very specific idea in mind, or did you see them for the first time coming to life during the audition process?

Before the casting, I had a completely different idea of how the character would look like. But through the 2 days of casting, I eventually went with an actor that was able to portray the character closer to what I have envisioned.

9. How did you work with your actors for the more romantic, intimate scenes?

Around two weeks before the shoot, I met with the actors for coffee, chat and we rehearsed a lot. We did this so that they could get used to my style of directing and familiarize themselves with each other thus allowing them to be more relax when it comes time to shoot. The actors were also very professional. Even though it was the first time that they have met in this project, they were able to get into character really quickly and were able to get the shots as I envisioned.

10. Will Jason wait for Grace in the next life?

I believed that he will because true love transcends both life and death, and true love lasts eternally and indefinitely!

11. What’s next for you? What are you working on at the moment?

Recently, I have been involved in many short films. Some of which I have directed, others I have produced. Personally, I want to try making different genres of movies. Take “If We Have Next Life” for example, the ending was so sad perhaps I could make a movie with a happier ending next. Because life is so short, I want to create works that depicts a happier moment in time.