Skip to content
Interview with the director Elvira Sinelnik

Interview with the co-director Elvira Sinelnik

Elvira Sinelnik is a young talented producer, director and actress originally from Russia. She co-wrote, produced and directed her short film Lifeless alongside director Alex Fedosov. In this interview we talk about transitioning from acting into directing, the inspirations behind the movie and the importance and consequences of social media on our everyday lives. Most of all, we tackle into the future of filmmaking in a world post pandemic: How can movies bring us closer when we all feel so distant? How can cinema unite us while keeping us 6 feet apart?

1. Hi Elvira, it’s been a pleasure watching your work and congratulations on being a winner at the Oniros Film Awards! When did you decide to become a filmmaker?

First of all, we are deeply honored to receive this award for Best Experimental Film!

For me, directing has always been some sort of distant and absolute magic. I always wanted to try it, and when we came up with the idea for our film, I knew I really wanted to be a co-creator. Alexey, our director, is an experienced and infinitely talented person. I watched every move, did my best to help create, worked with the actors, and finally realized that I was really falling in love with the process of making a movie on the other side of the camera. I think it’s a love for life! It’s this sort of other world that I want to be a part of. Now I’m studying directing, and really enjoying it.

2. Where does the inspiration of “Lifeless” come from?

Social media is a subject that has always been interesting to me, and it has even worried me. Unfortunately, what triggered us to come up with this film was something that happened to a person very close to me. I realized that I wanted to convey this to the world. When I told Alex about the idea, he agreed, enthusiastically, because it turns out that the subject matter was close to him as well. The stars aligned so I proceeded conducting social surveys and speaking with a large number of people of different ages. It was shocking to see how many people actually depend on social networks. As one very good actor said, “the main thing is that this addiction can turn into a cancerous tumor”.

3. Elvira, did the acting lead you into directing or vice versa?

Of course, I’m an actress first and foremost, but thanks to our team and our director, Alex, I was able to dip my toes into the directing pool, especially into that feeling that you’re creating your own world, your own reality. Communicating and directing actors is another aspect of the same job. Alex is a very delicate director with both experience and intuition which he used to reach his goal. He was incredibly successful. 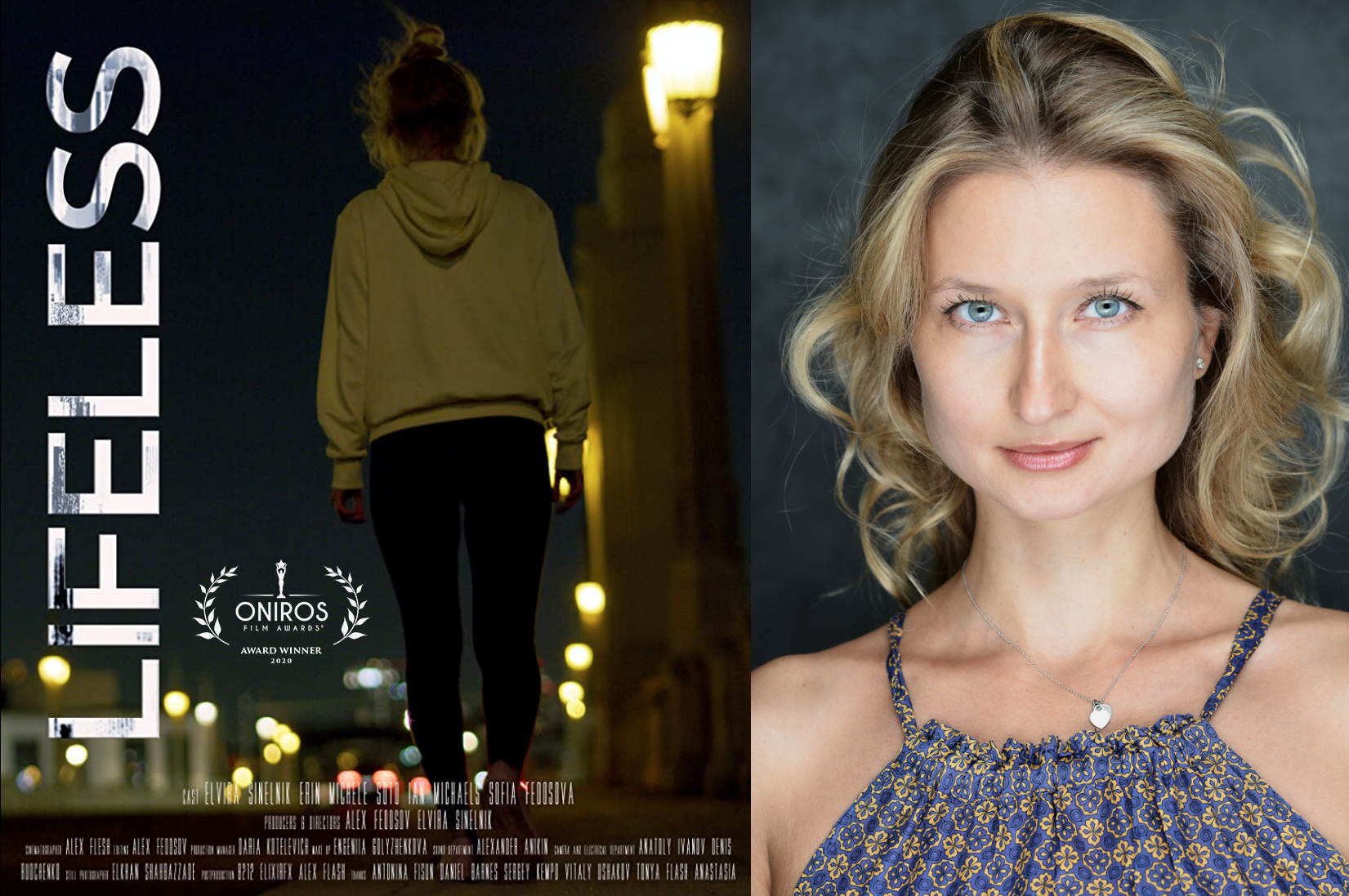 4. You wrote, directed and produced your film together. How was this experience for you? Which part did you love the most and which part did you find more challenging while working together on set?

Working with Alex was easy and informative. I really dove into the project, from start to finish. When the idea of the movie was born, I wrote the story and shared it with Alex, and he started immediately to work on the script and offered an unexpected ending to the movie. There were a lot of mini adventures during the process, and even some serious hiccups, but the Universe really was on our side during filming. I think it’s important to note that cinema can inspire. It can really open your eyes to the more important things in life and make the world a better place. It makes people happier! To be honest, I was fascinated by the whole process. It was very easy to work with Alex and our dream team. Editing ended up being the hardest element. Our Russian-American production was challenging but very inspiring!

5. What are the actors that inspire you the most?

I was really inspired by Marlon Brando’s acting. It was important for me to try figure out the secret to his ability to be completely present in the shot. Some of my idols include Grace Kelly, Audrey Hepburn, Julia Roberts And, of course, Meryl Streep. Besides this, Meryl Streep’s life philosophies are quite similar to mine, and her acting continues to excite with each new film. I would love to come even somewhat close to her craft. I am currently reading Audrey Hepburn’s autobiography, and there is no limit to my excitement in finding out nuances about her. If we’re talking about Russian actresses, I’d have to say that Chulpan Khamatova is an idol of mine. However, in truth, I could go on and on about the leading actresses in Russia. We have a lot to learn from each of them.

6. In light of the recent events, what do you think is the role of cinema in a world post-pandemic?

As for art, it makes my heart beat just a little bit faster. It sends endorphins rushing through me when I’m on set. Cinema is supposed to unite us. It did so before the pandemic, and it does even more so during and after. The pandemic has once again shown us that you have to live in the moment and enjoy the small things in life. Cinema should be different and inspire us. It should reflect social problems, but simultaneously be easy and accessible. Film creation should be inclusive. It should be a melting pot of nationalities, languages, and mentalities. It’s a splendid art form with no boundaries. Obviously, due to the pandemic, filming restrictions have posed complications, but now is the time to adapt and learn to interact and continue to create in this new world together.

7. Agents and casting directors require a stronger social media presence and a certain number of followers on Instagram. Do you think this has changed the way we perceive actors? As an artist yourself, do you enjoy this new trend?

Social media is just a tool that can be used to showcase your work and draw more attention to it. I don’t think it should be an obsession or the main criteria used to judge talent. I am definitely not a supporter of actors being chosen based on the number of followers they have online. Not all talented actors and creatives have pages on social media.

8. Regarding the scene on the bridge, what is the relationship between Elza and Ellie? What is the meaning behind this encounter?

I don’t want to give anything away, seeing as there are people that still have yet to watch Lifeless, but I will say that these two characters are very close to each other, as if two sides of the same coin…

9. Many film directors use a colorful piece of clothing to evoke specific reactions in the audience. I immediately thought of Steven Spielberg and the girl in the red coat in Schindler’s List. Why a yellow sweater? Is there a specific reason why you chose it?

Alex and I really wanted to bring something important to the screen. We wanted our film to be something that unites a family, something that evokes certain emotions in them. Yellow is one of my favorite colors, and our hero’s daughter also loves yellow…We caught this incredibly beautiful moment on camera, with the yellow scarf falling from the bridge, but we weren’t able to use the shot for technical reasons. Yellow carries this huge meaning for the family in our film. It’s their happy color…

10. How do you work with your actors? Do you like to let them improvise and see what they bring on the table or do you arrive on set with a very clear idea of what you want to achieve in the scene?

Alex is very professional. He came to set with one and only one vision, and once we began rehearsing, he felt the need to change his approach with the actors. Only then would they be able to fully grasp the concept, and, in the end, the change worked out for the best. I was really pleased to be able to communicate with the actors, express my vision, and direct, seeing as I’m the co-creator. Alex and I both had the same idea in mind of how the actors should play, and what motives, goals, and purposes they had… When you’re on set, there has to be a sense of flexibility. The actors have their own vision of the characters and their feelings, and this can coincide or conflict with the director’s vision. However, the director should certainly be the driving force. Alex did it greatly. And I really want to pay tribute to our wonderful actors. Both Erin Michele Soto and Ian Michaels jumped into the project just few days before filming, so their preparation was very short. They still did it! We’ve also been awarded for Best Acting Duo from other festivals.

I am infinitely grateful for my dream team. Every member went out of their way and really wanted to create this story. The talented Alex Fedosov, and our cameraman: Alex Flash, who is always ready to capture a shot from any angle, given any circumstance even when it seems impossible!

Alexander Anikin, our sound engineer, for his subtle creative approach to every melody and every track used to highlight the painful moments in our story.

Anatoly Ivanov (our assistant cameraman), thank you for your attentive and professional approach to every single moment of deciding a shot with the cameraman. And for taking care of the quality of the shot! Elkhan Shahbazzade for bringing every picture to life! Daria Kotelevich, Evgeniia Golyzhenkova, thank you for your care and your professional approach, and for your desire to help absolutely everyone!

Thank you to my lovely actors, Ian, Erin, and Sophia! This movie, this story would not exist without you!

Thank you very much to Denis Rudchenko and Akhmet Bek for their help and timely participation!!! Thank you from the bottom of my heart to the B212 team, led by Vova Dovbnia, for their magical, high-quality, and high-speed work!!! I know how difficult this all was.

Thank you to Daniel Barnes for helping with adapting the script, and also Vitaly Ushakov! Anastasia Dokunin, Antonina Fisun, Tonya Flash, Maria Furdychka, Fran Kirchmair, Nastya Merinova – a separate and sincere thanks to each and every one of you! Thank you for your belief! For your inspiration, help and support during every second of this process!

Only thanks to a team like this were we able to bring “Lifeless” to life.